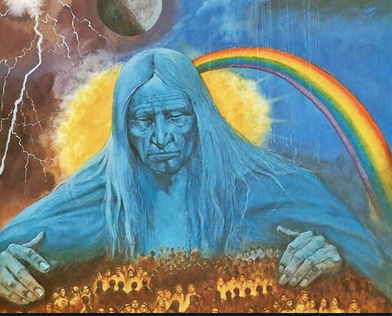 While there are many Native American prophecies, some of them are much more popular than others. This one in particular, has been gaining a lot of coverage as it seems to be coming true.

One of the most common versions of this prophecy has been shared by Dr. Lelanie Fuller Anderson, known as Mrs. Cherokee. She has written many books on Hindu herbal medicine and reviewed a lot about dreams.

His version of this prophecy that he says was transmitted to him by his grandmother when he was still very young. She intends to keep this prophecy alive and has posted it on her website.

There was an old woman, from the “Cree” tribe, called “Eyes of Fire”, who prophesied that one day, due to the greed of the white man or Yo-ne-gis, there would come a time when the fish would die in the streams, the birds would fall from the air, the waters would blacken and the trees would no longer stand and humanity, as we know it, would cease to exist.

There would come a time when “guardians of legend, stories, cultural rituals and myths, and all ancient tribal customs” would be necessary to restore health. They would be the key to the survival of humanity, they were the ” RAINBOW WARRIORS ” .
There would come a day of awakening when all the peoples of all the tribes would form a New World of Justice, Peace, Freedom and recognition by the Great Spirit of the Earth.
The ” ARCO RAIS WARRIORS ” would spread these messages and teach to all the peoples of the Earth. They would teach them how to live the “Way of the Great Spirit”. They told them how the world today has turned away from the Great Spirit and that is why our Earth is “sick”.

“THE WARRIORS OF THE RAINBOW” would show the people that this “Ancient Being” (the Great Spirit) is full of love and understanding, and will teach them how to make the “Earth” beautiful again. These Warriors would give people principles or rules to follow to make their way right with the world.
These principles would be those of the ancient tribes. ” THE WARRIORS OF THE RAINBOW “ would teach people of the ancient practices of Unity, Love and Understanding. In the four people of Earth, they would teach harmony among people.
Like the ancient tribes, they taught the people how to pray to the Great Spirit with love that flows like the beautiful mountain stream and flows along the path to the ocean of life. Once again, they could feel joy in solitude and advice. They would be free from petty jealousy and would love all humanity as their brothers, regardless of color, race or religion.
They would feel happiness in their hearts and they would unite with the entire human race. Their hearts would be pure and radiate warmth, understanding and respect for all of humanity, nature and the Great Spirit. They would fill their minds, hearts, souls and works with the purest thoughts. They would seek the beauty of the Master of Life: the Great Spirit! They would find strength and beauty in prayer and in the solitudes of life.

Your children, once again, could run free and enjoy the treasures of nature and Mother Earth. Free from the fears of toxins and destruction, forged by the Yo-ne-gi and its greed practices. The rivers would run again clear, the forests would be abundant and beautiful, the animals and birds would be replaced. The powers of plants and animals would be respected again and the preservation of all that is beautiful would become a way of life.
The poor, sick and needy would be cared for by their brothers on Earth. These practices would once again be part of their daily lives. The leaders of the people would be elected in the old way, not by their political party, or those who could speak louder, boast more, or by name or by mud, but by those whose actions they spoke louder.
Those who demonstrated their love, wisdom and courage and those who demonstrated that they could and worked for the good of all, would be chosen as leaders or leaders. They would be chosen for their “quality” and not for the amount of money they had obtained. Like the thoughtful and devoted “Ancient Chiefs”, they would understand people with love and see that their young people were educated with the love and wisdom of their environment. They would show you that miracles can be performed to heal this world of their ills and restore health and beauty.
The tasks of these ” RAINBOW WARRIORS” are many and great. There will be terrifying mountains of ignorance to conquer and you will find prejudice and hatred. They must be dedicated, unwavering in strength and strong in heart. You will find hearts and minds willing to follow them on this path of returning “Mother Earth” to beauty and abundance, once again.
The day will come, it is not far. The day we will see how we owe our existence to the people of all the tribes ” THE WARRIORS OF THE RAINBOW “ that have maintained their culture and heritage. Those who have kept the rituals, stories, legends and myths alive. It will be with this knowledge, the certainty that they have preserved, that we will return again to the “harmony” with nature, Mother Earth and humanity. It will be with this knowledge that we will find our ” Key to our survival”.
This is the story and this is my reason to protect their culture, heritage and knowledge of my ancestors. I know that the day he spoke “Eyes of Fire” will come! I want my children and grandchildren to be prepared to accept this task. The task of being one of the “RAINBOW WARRIORS”.

Various types of Native Americans seem to be strongly connected to the rainbow itself, and although this is a Cree prophecy, there are also similar prophecies of the Hopi, the Zuni and many more. Whether you believe that this prophecy is true or not, you should be able to accept that it contains a very profound message. In a world full of greed and violence we could use some healing. 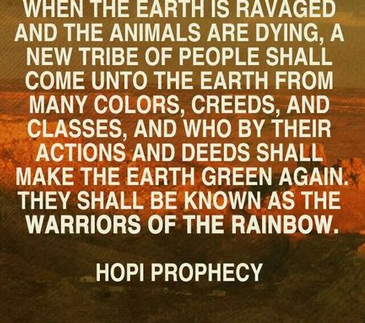