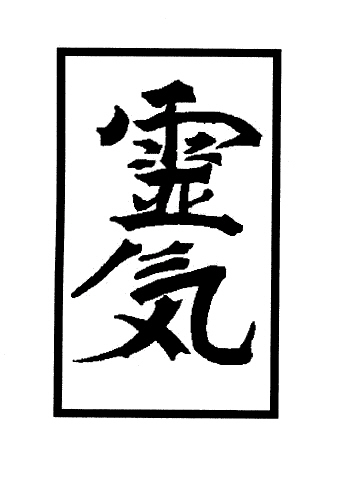 The Reiki symbol has a number of meanings:

REI– The first line across the top represents heaven or life force energy. The second horizontal line and the 4 underneath represent clouds/rain. The vertical line brings down the life force from heaven through the clouds of illusion. The next horizontal line symbolises ‘under’ heaven. The two vertical lines are people practicing reiki and dancing while sharing their blessings with the earth which is the bottom line.

Reiki is a simple and natural method to actively help yourself grow (like a rice seed!) and achieve your full potential. The healing effects of this energy lead to a more peaceful life.

Originally the Reiki Story, and the process of attunements, was passed down by word of mouth only. This is the reason you will find that the stories handed down about Dr Usui and the other Reiki Masters differ slightly from lineage to lineage.

Reiki is the art and science of spiritual self improvement, originating in ancient Tibet thousands of years ago. The Reiki calligraphy, in Sanskrit, was used in meditation in Tibetan monasteries. Reiki symbols were painted on wall hangings in the monasteries and acted as the central focus in the practices towards enlightenment by Tibetan holy men. What is now called Reiki was rediscovered in the late 1800’s by Dr Mikao Usui.

Dr. Mikao Usui or Usui Sensei as his students in Japan call him, was born on 15th August 1865 in the village of ‘Taniai-mura’ (now called Miyama-cho) in the Yamagata district of Gifu prefecture Kyoto. The Usui family were Tendai Buddhist followers. They came from a Samurai background and were ‘Hatamoto’ that means they were from the higher Samurai ranks. As a child he studied in a Tendai Buddhist monastery school entering at an early age maybe as young as 4 years. He followed the Buddha’s teachings all his life and was a very spiritual man.

He also had a sister and two brothers, one of whom studied medicine. He practiced in the Martial Arts from as early as 12 years old eventually reaching the highest levels of Menkyo Kaiden by his mid twenties. He continued training in the Arts and reached high levels in several other of the most ancient Japanese methods. He was renowned for his expertise and highly respected by other well known martial artists of his time. He was a talented hard working student, he liked to read and his knowledge of medicine, psychology, fortune telling and theology of religions around the world, including the Kyoten (Buddhist Bible) was vast. His journeys led him to America, where he attended the University of Chicago and became a Doctor of Theology. He travelled to North India, where he was able to study the Holy Writings. Dr Usui had command not only of Japanese, Chinese and English but also Sanskrit.

He later returned to Japan where he discovered some Sanskrit formulae and symbols in old Buddhist sutras which seemed to hold the answers to his questions. At the time, he was living in a monastery in Kyoto and after he had spoken to the Head, he set off to the Holy mountain of Kuriyama. Here he enrolled in Isyu Guo- a training course sponsored by the Tendai Buddhist Temple located there. He intended to fast and meditate in solitude for twenty-one days.

On his arrival at the mountain, he placed twenty-one little stones in front of him and removed one at the passing of each day as a kind of calendar. During this time he read in the sutras, sang and meditated. Nothing unusual happened until the last day dawned. It was still dark when he saw a shining light moving towards him with great speed. It became bigger and bigger and finally hit him in the centre of his forehead. Dr Usui thought he was going to die, when suddenly he saw millions of little bubbles in blue, lilac, pink and all the colours of the rainbow. A great white light appeared and he saw Sanskrit symbols in front of him glowing in shining gold and he said ‘Yes, I remember.’ When he returned to a normal state of consciousness, the sun was standing high in the sky. He felt full of strength and energy and began to climb down the mountain. In his rush he stubbed his toe. He held it with his hand for a few minutes and the bleeding stopped and the pain disappeared. This was the first miracle. Since he was hungry he stopped at an inn at the wayside and ordered a large meal. The innkeeper warned him not to eat such a large meal after fasting for so long, but Dr Usui was able to eat it without the least bad effects. This was the second miracle. The granddaughter of the innkeeper had a bad toothache, for which she had been suffering for several days. Dr Usui laid his hands on her swollen face and she immediately felt better. She ran to her grandfather and told him that their guest was no ordinary monk. This healing was the third miracle of the day. Dr Usui returned to his monastery and went straight to the head monk who was in bed with bad arthritis, as soon as Dr Usui started to tell him about everything that had happened to him and laid his hands on him the head monk was healed – so that was the fourth miracle of the day.

Dr Usui decided to go to the beggar City in the slums of Kyoto to treat the beggars and help them lead better lives. He spent seven years in the asylum treating many illnesses. One day he noticed that the same faces kept returning. When he asked why they had not begun a new life he was told that working was too troublesome and that it was better to go on begging. Dr Usui was deeply shaken and realised he had forgotten something of great importance in his healing, namely to teach gratitude. In the following days he thought out some Reiki maxims:

Just for today do not anger

Just for today do not worry

Show gratitude to all living things

Be kind to others today

This is taught as the ‘reiki principles’.

Usui was awarded the title of Dr. for healing many people after an earth quake. Up to this point (about 1925) The Usui system consisted of the energy itself, the symbols and the reiki principles. He had set up teaching groups and Usui trained 17 people to Shinpiden, or master level. There were 5 Buddhist nuns, 3 Naval Officers, and nine other men, including Eguchi who was said to have been Usui’s main friend and student. Eguchi later formed his own religion called Tenohira-Ryouchi-Kenyuka. The Naval Officers were Jusaburo Gyuda/Ushida, Ichi Taketomi and Chujiro Hayashi, and they went on to form the Usui Reiki Ryoho Gakkai Through these teaching groups Usui realised that people who received reiki could not fully appreciate its value- so Usui requested an ‘energy exchange’- in the form of money or service. Dr Usui died in 1926.

Chujiro Hayashi trained with Usui Sensei. He and the other Naval Officers Ushida and Taketomi were the last people to be taught by Usui. Together with the other naval officers, Dr Hayashi was a founder member of the Usui Reiki Ryoho Gakkai, a ‘memorial society’ set up after Usui’s death. After he completed his training, Hayashi kept detailed records of the treatments that were given, and used this information to create ‘standard’ hand positions for different ailments which ended up being published in the training manual given to the Gakkai’s students (the Usui Reiki Hikkei). In fact this work had already been started when Usui was alive, and it seems that Dr Hayashi was carrying out the research with Usui’s knowledge and approval. This guide to ‘hand positions for different ailments’ is very much trying to mould Reiki into the ‘medical model’, which was very different from Usui’s simple and intuitive approach.

Dr Hayashi founded his own society in 1931, five years after Usui died. It was called Hayashi Reiki Kenyu-kai, which means Hayashi Reiki Research Centre. Since Dr Hayashi had made some changes to the system he had been taught by Usui and Hayashi’s focus was very much on hands-on healing. Dr Hayashi would teach First Degree over a five-day structured course, with each day’s training taking 90 minutes, and students would receive his more complicated attunements on four occasions during this training. Dr Hayashi trained 17 Reiki Masters and produced a 40-page manual, which contained the hand positions for different ailments. Since Dr Hayashi would not have been taught Reiju by Usui Sensei, it would appear that he learned the technique when Eguchi joined the Gakkai for a year. Chujiro Hayashi took his own life on May 10th 1940. It is believed that he was concerned at the build up of nationalism in his country, and it was the threat of war that led to his death

Reiki comes to the West

Hawayo Takata was born in 1900 on the island of Kauai, Hawaii. She was suffering from multiple health problems including a tumour, gallstones and appendicitis and, originally intending to receive conventional Western medical treatments, came to Dr Hayashi’s clinic as a result of hearing, on the operating table just before the surgery was about to start, a voice saying “The operation is not necessary”. She asked her Doctor if he knew of any other way to restore her health avoiding further surgery. He referred her to Dr. Hayashi and she began a course of treatments at his clinic. Mrs. Takata was initially skeptical about Reiki, but her scepticism turned to belief, as her health problems were resolved, and she decided to learn Reiki for herself

Dr Hayashi agreed to teach Reiki to another woman besides his wife (someone who would not have to be called up to fight in a war), and Mrs. Takata’s persistence persuaded him to teach her to Master level, which happened in 1938. Dr Hayashi gave Mrs. Takata permission to teach Reiki in the West, and so she took it to the USA. She was the 13th and probably the last Reiki Master that Dr. Hayashi initiated, and between 1970 until her death in 1980 Mrs. Takata taught 22 Reiki Masters.

Until quite recently, all Reiki practitioners in the Western world could trace their ‘lineage’ through her to Dr Hayashi and Mikao Usui Mrs. Takata designated herself ‘Grand Master’ of Reiki, to make a distinction between herself and the Masters that she taught. This is a title that has nothing to do with Mikao Usui’s vision of Reiki. It is a gentle and powerful healing technique that can be passed as a gift from one person to another, recognising the equality and divinity of all, and is not headed by gurus or grand masters to be revered.

In much of the teachings that have come from the Far East, “Master” has been a term that many have used to refer to someone who is an enlightened teacher. However, in the title “Reiki Master”, the term “Master” comes from the Japanese word “sensei” which can be translated into English as “teacher”, “master” (as in school master) or “doctor” (as in PHD.).”Sensei” literally can be translated to “one who comes before” and is typically used by the student in deference to the teacher. “Reiki Master” was the term first used for the teacher when reiki was brought out of Japan in the late 1930’s and it seemed to stick. Therefore Reiki Master means a “teacher or instructor of Reiki” A Reiki Master simply has the knowledge and capability to transfer the ability to use Reiki to a student. As in any other disciplines, teaching ability, spiritual growth and knowledge differ from teacher to teacher and are usually determined by their own life and occupational experiences. You will find that some teachers focus more on teaching whilst others will focus more on healing.
For more information on learning Reiki, see my Reiki Classes page.